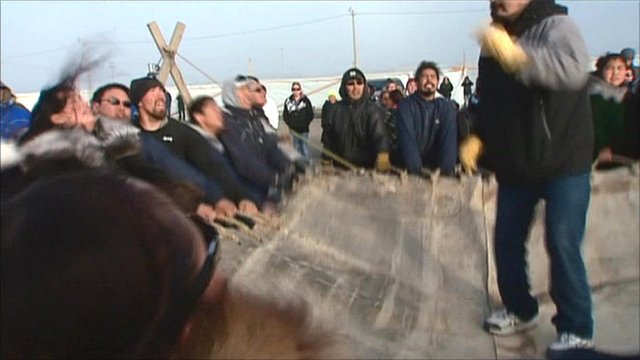 Have you ever wondered how and why trampolines were invented? Was this by accident or did someone decide that it is time to invent something people will jump on? And finally, who is that guy who made it? Let us try to answer those questions…

The idea of throwing people in the air has been around long before modern trampolines were invented. People from the Arctic regions, the Inuits, invented the first trampolines from walrus skin (acting as trampoline mats) and other people acting as springs, most likely Native Americans did something similar as well.

Some rumors say that circus performer and trapeze artist Du Trampolin came up with the first version of a trampoline. First, he used a trapeze net as a safety net if he would fell. But, he found out that if the trapeze net is intentionally tightened, it would act as a bouncing bed to jump high in the air.

No one knows if this is really true or just a fairy tale, but rumors were a base for inventors to create today’s modern trampolines.

When was the trampoline invented?

In 1934, men named Larry Griswold, who was gymnast and diver, and George Nissen, tumbler on the gymnastics team, expanded the original design of trampoline, using a piece of stretched canvas attached to frame by coiled springs. In 1936, to market a new invention, George Nissen rented a kangaroo to jump together on the trampoline in the middle of Central Park in New York.

The term „trampoline“ is based on the Spanish word „Trampolin“ which in English means „diving board“. After that, a company named „The Griswold-Nissen Trampoline and Tumbling Company“ was established and the rest is history.

First trampolines were primarily made for gymnasts but were quickly recognized as a good training tool used for balance and stamina, they were adopted by all other avenues as part of training equipment. Navy Flight School, NASA, and other space agencies, all recognized trampolines as the perfect solution for pilots and astronauts.