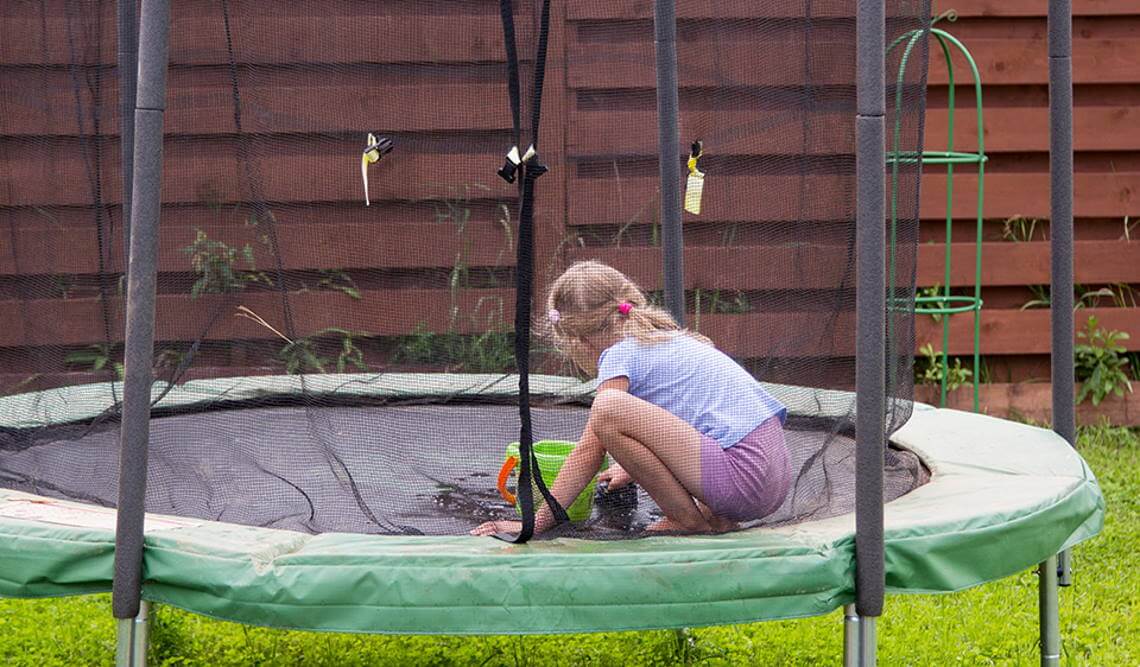 Younger children should never jump unsupervised or use larger trampolines (over 10 ft). Luckily, special kids trampolines exist tailor-made for them that keep them safe. The bounce isn’t high and they’re all covered in foam. Older children (usually 6 and up) can use backyard trampolines, but only one at a time.

Never let more than one kid jump at the same time. That’s how most accidents occur!

Trampolines are safe for recreational use if proper adult supervision is present, and adherence to strict safety rules is maintained – this is the opinion of most trampoline manufacturers and supporters. The American Academy of Pediatrics (AAP) and other organizations such as the Consumer Product Safety Commission (CPSC) don’t think so… 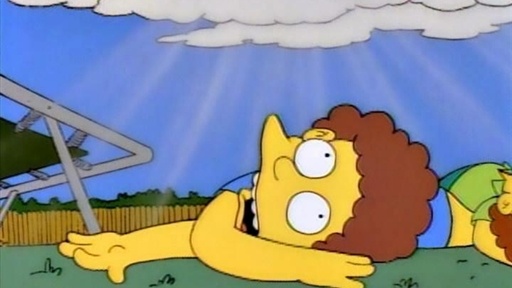 Rapid increase in trampoline sales during 1990’s, which is considered a decade when trampolines started to gain popularity, all without detailed safety standards to comply to, has lead to epidemic of trampoline related injuries, with total of eleven deaths.

All that lead to fact that several organizations, among them American Organization of Pediatrics,  were struggling to completely ban sale of home trampolines.

At first, I’d let my kids jump at their neighbors’ place, but they managed to cajole me into buying them a trampoline they can use on their own. And believe me, was is scared out of my mind! Here I was, a responsible mom of two, buying my kids what seemed like a deathtrap!

Official stats and manufacturers themselves advise against letting multiple jumpers on the trampoline at the same time. Their advice is solid. When two people jump, they can accippingidentally hit or land on each other. Ow! The bouncing motion itself can make it harder to predict how and where you want to bounce – so you risk completely losing control. It’s bad enough for an adult, let alone a kid!

No somersaults, no flips, no fancy bounces. Don’t be too strict – allow them to have fun, but don’t allow them to do as they please. Mind that we have a list of fun trampoline games that even multiple children can enjoy! 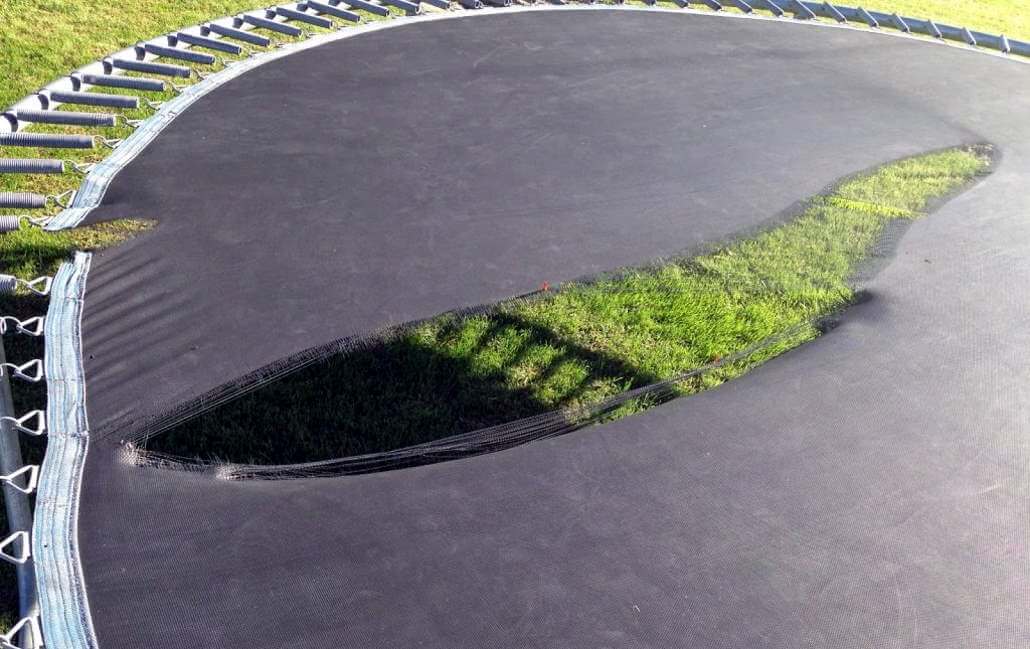 Always check for scratches and holes in the mat. If it’s just a little hole, it becomes a safety concern. Mat’s are the ones that are stiff and absorb most of the force while jumping, so small holes can really quickly become big ones. You don’t want your kid to fall through. Inspect, inspect, inspect!!! Click to learn more about how important mats really are.

A trampoline is more stable the more legs it has, but no legs can save it if you put it on an uneven surface. We used a string trick – hammer two stakes into the ground, where the sides of the trampoline would be and tie the string from one stake to another to check for surface slope. 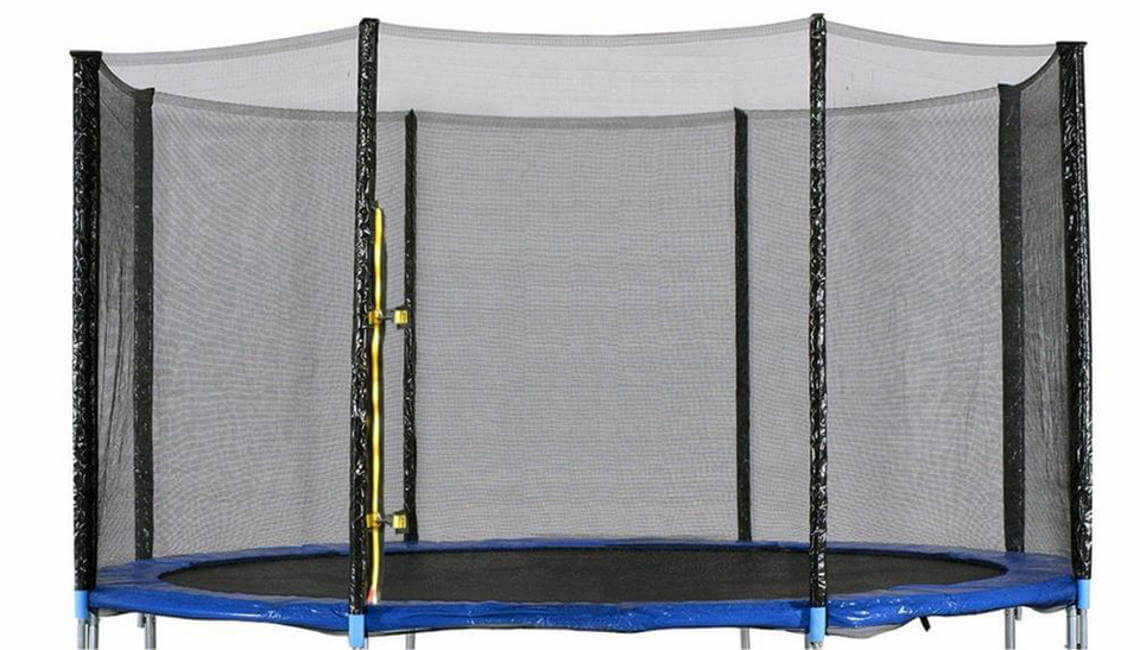 A good trampoline enclosure is a must. It consists of sturdy, padded poles that hold taut, strong netting that goes around the entire trampoline mat. The enclosure should be high enough so that people aren’t able to jump over it, and strong enough to keep the bouncer inside even if they mistime and misjudge a jump. We prefer enclosures where the netting is sewn directly onto the mat, keeping the entire spring area outside of the enclosed bouncing surface.

You should never purchase a trampoline without enclosure. Even though an overwhelming majority of trampolines on the market come with an enclosure, there still are some that go without. Avoid them unless you’re a pro.

It’s important to have fairly thick safety pads (at least about an inch) that cover the springs. They cushion the force of impact and prevent limbs from getting tangled with springs. Springs can carry huge loads and forces and if a person’s finger or a toe gets stuck, it’s never a pretty sight.

If you are in two minds about which trampoline to buy, head over to ProTrampolines USA homepage and check some reviews – you just might find something you fancy. Or check our “Trampoline Buying Guide“

Evidence from all of those combined reports suggests that the following factors can be identified as the main cause of injury:

Kipping is a phenomenon where you get enhanced uplift as a result of the mattress is compressed slightly before other jumper lands on the same surface, causing the mattress and springs to be moving upwards (recoiling) at the moment when other jumper lands. It causes much greater force and momentum than the jumper expected and results in unintended rotation or even backward somersault, which can result in serious injuries.

Different studies shown different numbers so here they are – Ninewells Hospital Study (47% of injuries because of multiple users), Wotton and Harris (82% of injuries), RoSPA (75% of injuries).

The US Consumer Product Safety Commission stated that 95,000 hospital emergency room-treated injuries in 1998 were associated with trampolines. 75 were kids under the age of 15. Then in 2002, the CPSC again estimated that 60,000 trampoline-related emergency room-treated injuries were kids between the ages of 5 and 14. Since 1990, the CPSC has received six reported deaths involving the seemingly harmless trampoline. In data from 2009. there were nearly 98,000 U.S. trampoline injuries, 0.05% of which, or about 50, caused paralysis or other permanent neurological damage, according to the National Electronic Injury Surveillance System.