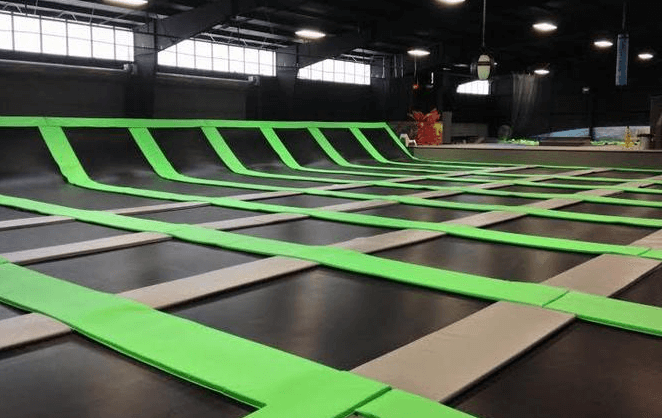 Three trampoline parks are going to open their doors in Chattanooga this year, part of a nationwide trend of bounding growth in an industry that’s got millions of Americans bouncing on wall-to-wall trampolines.

The first set to open at Chattanooga’s Southside in February 2014. Built by a local developer John Wise, Jump Park Chattanooga (1810 Chestnut St.) will include 20,000 sq ft of trampolines, a trampoline Dodge Ball court, a foam pit, obstacle courses, and an upstairs full of table games like ping-pong, shuffleboard, and darts. Jump Park Chattanooga will also include a cafe and party rooms and will be next door to a 10-lane boutique bowling alley that will feature a full bar and restaurant. Something for everyone!

The newest attraction is still under construction, but it’s going to be opened in Chattanooga in January 2014. with more than 10,000 sq ft of trampolines! The facility will feature more than 25 trampolines, a yoga studio, cafe, party rooms plus Zoomba Air, Aerobics, a fight club, and a lot more. A real paradise for jumping enthusiasts. The location of Trampoline Park is an old industrial building just across Finley Stadium!

By the end of the summer, John Wise plans a second location for the third trampoline park in the region, which will be located somewhere in Ottawa.

Between these openings, developer Case Lawrence  SuperFly trampoline park is slated to open in May 2014, near Hamilton Place Mall. The 30,000 square-foot building will be half-full with trampolines, Lawrence said. The center will also feature an aerial obstacle course and trapeze where customers can hone their skills above giant foam pits. Superfly Trampoline Park will be his 10th and largest park. He hopes to serve the entire region, pulling customers from North Georgia, Cleveland and Chattanooga.

Internally we’re calling it a ‘supercenter, Lawrence said. “It won’t just be trampolines; we’ll have all kinds of attractions.”

If you are worried about safety, no need to be. While the rate of trampoline park injuries is hard to estimate, one trampoline park owner in Illinois estimates about 2 of every 1,000 customers is injured while jumping. That’s less than other sports, according to the American Academy of Pediatrics. About 21 people per 1,000 are injured while playing soccer.