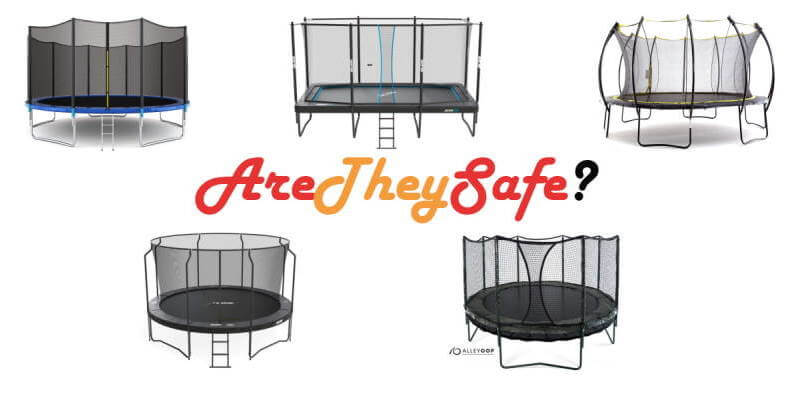 Care About Safety of Your Children?

Trampolines are safe for recreational use if proper adult supervision is present, and adherence to strict safety rules is maintained – this is the opinion of most trampoline manufacturers and supporters. The American Academy of Pediatrics (AAP) and other organizations such as the Consumer Product Safety Commission (CPSC) don`t think so…

NOTE: Just take a look at trampoline safety instructions or manual which should also include advice for proper care and maintenance of the equipment .

Here is “Study Of Trampoline-Related Injuries” published in one of the issues of the journal Pediatrics:

The US Consumer Product Safety Commission states that 95,000 hospital emergency room-treated injuries in 1998 were associated with trampolines. 75 were kids under the age of 15. Then in 2002, the CPSC again estimated that 60,000 trampoline-related emergency room-treated injuries were kids between the ages of 5 and 14. Since 1990, the CPSC has received six reported deaths involving the seemingly harmless trampoline. In data from 2009. there were nearly 98,000 U.S. trampoline injuries, 0.05 percent of which, or about 50, caused paralysis or other permanent neurological damage, according to the National Electronic Injury Surveillance System.

If you make some precautions most of this accidents can be prevented. So inspect your trampoline regularly and have a safe fun!

We’ve divided it into two groups, before using a trampoline and while you’re jumping your fun out!

What about trampoline parks, are they safe enough? International Association of Trampoline Parks officials said they had spent several months on an ASTM International task group, helping create standards that give trampoline park owners “guidance for planning, operation and signage, while establishing clear, responsible-conduct guidelines for the public.”

The majority of injuries caused by using trampolines include sprains, fractures, scrapes, bruises and cuts, and serious injuries to the head and neck which can cause paralysis and death. According to the American Academy of Pediatrics (AAP), disastrous cervical spine injuries are rare, but head and neck injuries constitute a considerable number of the more serious injuries requiring hospitalization. The CPSC also issued safety measures while using the trampoline which include:

Parts of trampoline you should care most?


Honestly, Everything is Important!

Trampoline springs is part of trampoline which gets hit all the time. With rust or broken hooks it can be real time bomb. If any of trampoline spring is broken, weight it needed to support will be transferred on surrounding springs increasing the danger of their breakage. If you find springs like that please do not continue to use it until you replace problematic part.

Trampoline mats are another thing to be careful about. Not only you are jumping on it all the time, rain and UV rays can do pretty much damage to it. If you`ll see a part which is torn or wear do not jump on it until trampoline mat is replaced.

Trampoline Enclosure – preventing #1 injury on trampoline – falling outside! Always check if there are no cuts on enclosure!

Taking routine inspections can save you day. Those are the accidents that can be prevented but do happen only because of human mistake. In this case this is mostly laziness to do 30 second work.

If you need new trampoline, feel free to check our Reviews of best Irish trampolines